Foreign buying of US real estate slows over the intermediate term

This month, given the recent, constant barrage of international news in the press, we decided to relate the issue of US real estate markets to foreign interests and sales stats. As you’ll see-these foreign investors have been pulling back substantially in their buying of houses here at home over the past couple of years–and to a surprising degree. Please note that this letter is expressly not intended to be a politically oriented or motivated discussion. Its focus is the economics of real estate, which as you can imagine, is one of our favorite subjects.

The US – China ‘trade war’ appears to have accelerated into a new phase, as the Trump administration said last week it would impose 10% tariffs on another $300 billion worth of Chinese goods. Now it looks like China is retaliating by letting their currency, the yuan, depreciate. The yuan, tightly controlled by the Communist government, recently made lows vs the dollar not seen since 2008. A lower yuan may make Chinese exports less expensive globally, and serve to counteract the effects of U.S. tariffs. Many industries may be affected by the yuan’s depreciation vs the dollar — including real estate. A cheaper yuan/stronger dollar makes foreign real estate more expensive for Chinese mainlanders.

But if you’re thinking that a falling yuan will constrain foreign investment in U.S. residential real estate, don’t be concerned. This is an intermediate-term trend that’s well underway, as foreign buying of US houses has been waning for a couple years now.

According to the National Association of Realtors annual report on foreign buyers of U.S. residential real estate, in the two-year period between April 2017 and March 2019:

In fact, purchases by foreigners are now at the lowest level since 2013, when buyers from China and South America first began entering the U.S. market in large numbers in search of bargains and a safe place to stash their capital in a stable, world-leading economy.  However, to be fair, purchases in 2019 are more in line with the historical average of the past eight years, whereas 2017 and 2018 saw spikes that have since reverted back toward the mean.

“It’s quite striking in terms of the magnitude of the decline,” said Lawrence Yun, the Realtors’ chief economist. 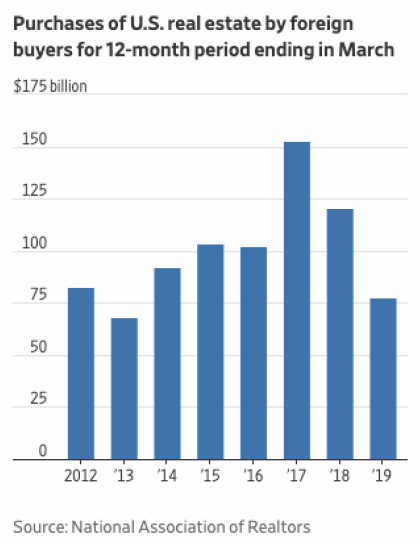 “The luxury markets in the biggest cities are typically the most affected,” the NAR points out. “It has led, in some cases, to an oversupply of high-end units, longer times to close deals, and potentially even price drops.” Top 5 Countries of origin of foreign buyers & their purchases from 2017:

Beginning around 2013, newly minted Chinese millionaires began buying houses in a number of North American markets (including our home turf in Denver, CO)–contributing to sharply rising prices in select markets. Chinese buyers may view US real estate investments as a “hedge” against slowing growth in their own economy, or even against possible wealth confiscation by the Chinese Communist party. In the US, property owners own the land, and have well established property rights. In China, residents can only lease the land from the government, which owns all land.

Another trend is Chinese parents increasingly sending their children to the US for an education, often buying US houses for their kids to live in.   However, a slowing global economy more broadly, a lingering trade dispute with the US, anti-immigration policies and a stronger US dollar have increasingly conspired to make America a less desirable place for foreigners to invest over the last couple years.  The Top 5 U.S. markets for foreign real estate buyers:

But there could be a silver lining to the slowdown of foreign home purchases:  just as the flood of foreign buying in a handful of expensive US markets made housing scarce, the decline of foreign buyers might result in a more balanced supply/demand in those formerly overheated markets. Time will tell, but for now the supply shortage issue endures in many US housing markets.

Aloha Fund’s fifty-three month run of positive performance since inception continues. May has the Fund posting its best return of 2019 thus far. This uptick illustrates the process of purging non-performing loans, and any associated write downs, toward the goal of optimizing the portfolio. It also frees up capital for additional lending opportunities moving forward.

In other financial news, equities have recently seen a sizable dip hit the ticker, with one day drops in the major indexes being the biggest of 2019 to-date. Volatility of this magnitude may or may not be a harbinger of a bigger correction to come in stocks this summer. Either way, it provides a nice contrast to the smooth return stream and 100% track record of winning months since inception for the Fund. Consistency is valuable in the world of managed money, and we hope our investors are enjoying it.